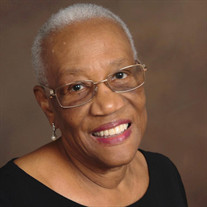 Celebrating the Life of Mavis Matilda Palmer Sunrise June 6, 1941 - Sunset August 1, 2021 Mavis was born on June 6,1941 in John's Hall District, in the Parish of Manchester, Jamaica to the late Joseph Dillon Palmer and Adlyn Christie Palmer. Mavis was the sixth of ten children. She was the mother of Sonia (Joan) Morgan, and Kaliff Palmer, who both preceded her in death. As part of the body of Christ, Mavis was confirmed at the Nazareth Moravian Church in Manchester, Jamaica and attended the Nazareth All Ages School. After completing formal education in Manchester, Mavis moved to Kingston to pursue a career in the hospitality industry. In 1970, Mavis migrated to Detroit, Michigan, where she was a homemaker before being employed at Providence Hospital in Southfield, Michigan; she retired from there after 35 years of service. While at Providence Hospital, she formed a deep bond with several co-workers, resulting in long-lasting friendships. During her early years in Detroit, Mavis was involved with the Jamaican West Indian Association where she participated in promoting and organizing cultural awareness events; this included the blending of other Caribbean Nations. These cultural activities allowed her to establish a wide circle of friends from all over the Caribbean and Canada. Celebrating Jamaican culture with food, music, and dance was a regular past time. One of the things Mavis enjoyed as a member of the Association was attending Cricket matches at Belle Isle Park in Detroit. Mavis' many interests included her daily ritual of completing crossword puzzles, watching National Geographic, enjoying the Nutcracker Ballet during Christmas, and listening to Gospel music. She also enjoyed her many trips overseas, including but not limited to the Caribbean, Canada, and Europe. Mavis' love for her family was second only to her love for the Lord. She was an active member of St. Timothy's Methodist Church for almost 40 years. She was a choir member, usher, and volunteer for St. Timothy's congregation, and was a humble servant of the Lord. She worked tirelessly to ensure that her children had what they needed. Her grandchildren, David (Shawn) and Samantha were the apples of her eye and filled the space in her heart after the loss of her own children. She never missed any of her grandchildren's school activities, attending all award ceremonies, recitals and performances. She loved her only great-grandson, Jayson, who was her "little man". She knew there was no better place to be than with the ones you love and that love you the most. On the early morning of Sunday, August 1, 2021, Mavis transitioned peacefully in her home surrounded by her adoring family. She was deeply cared for by her niece, Theasia (Heather) Morris, and long-time family friend, Ann (Jane) Small, during the last few years of life. Her legacy will be forever cherished by her grandchildren David (Shawn) Morgan; grand-daughter Samantha Guyah (Jared); and great-grandson, Jayson Guyah (Samantha and Jared); sisters, Lucille Morris, Daphne Cowan, Cissylin Smith, and Beverlee Palmer; brother, Wesley Palmer (Alberta); and a host of nieces, nephews, cousins, family friends, and she will always be known to each and every one of us as Aunt Mavis. Join Zoom Meeting https://us06web.zoom.us/j/890768312?pwd=eS9qdmwzdXBUdm1nRG9icUNyS3BiQT09 Passcode: 1234567 Repast: 23090 Parklawn Street Oak Park, MI 48237 3:00pm

The family of Mavis Palmer created this Life Tributes page to make it easy to share your memories.

Send flowers to the Palmer family.