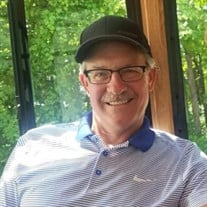 Michael W. Bush, age 57, passed away on Thursday, April 28th, 2022 after a yearlong battle with cancer. Mike was born to Bill Bush and the late Shirley Bush in Royal Oak, MI and a lifelong resident of Madison Heights. Mike was a loving husband to his wife Linda and a devoted father to his daughter Shannon. Mike was introduced as a young child to his first Michigan football game by neighbor, Mr. Kelly. Mr. Kelly impressed upon Mike the love of Michigan football and the excellent education this institution provided. Mike aspired and eventually graduated in 1986 from the University of Michigan with a degree in Industrial Engineering. Mike was employed by Magna International for 32 years where he met many mentors and colleagues that remained valued lifelong friends. There was nothing Mike loved more than his family, U of M sports and dogs. Mike enjoyed his home up north in which he named "The Big House". This was a place of peace, recreation and provided fun and happy times for friends and family. Mike especially enjoyed fishing, his four-wheelers, his various remote-controlled "toys" as well as walks to the farm and creek with his family and dogs. Mike will always be remembered for his outgoing, friendly, and goofy personality as well as having a genuine care for others. Mike is survived by wife Linda and daughter Shannon (Jesse). Survived also by his sister Debbie (Mark) Mulawa, brother-in-law Len (Tamara) Toombs, father-in-law and mother-in-law Syl and Joan Toombs and father Bill Bush. Uncle to niece Alayna and nephews Ryan, Matthew and Brandon. Also, his "brother from another mother" Chris Cook and second mom Mrs. Rearick. He will be missed by his dog buddies, Olive and Brady. Visitation will take place on Sunday, May 1, from 2 - 7 p.m. at Wm. Sullivan & Son Funeral Home, 705 W. 11 Mile Rd. (4 blocks east of Woodward), Royal Oak. Funeral Mass will take place on Monday, May 2, at 10:00 a.m. (visitation 9:30 a.m.) at St. Vincent Ferrer Catholic Church, 28353 Herbert St., Madison Heights. Interment will follow at Oakview Cemetery in Royal Oak. In lieu of flowers, please donate to your local animal shelter. Share a memory at www.SullivanFuneralDirectors.com.

Michael W. Bush, age 57, passed away on Thursday, April 28th, 2022 after a yearlong battle with cancer. Mike was born to Bill Bush and the late Shirley Bush in Royal Oak, MI and a lifelong resident of Madison Heights. Mike was a loving husband... View Obituary & Service Information

The family of Michael W. Bush created this Life Tributes page to make it easy to share your memories.