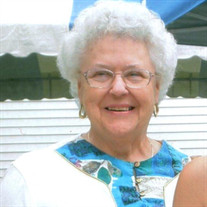 Her Legacy Patricia Joan Mickus (Ramas) - (October 15, 1938 - January 26, 2022), a recent resident of Clarkston, passed away in her sleep from Alzheimer’s disease. Patricia was happily married for 48 years to the love of her life, John Mickus, who passed away in 2010. They raised two children, Thomas and John Gregory (deceased). Tom will tell you his mother raised him to be a faithful Catholic. She attended daily mass and served the church as Eucharistic minister and altar maintenance. She was always behind the scenes helping and serving her family and friends. Patricia, Pat, Patsy, was born in Detroit, Michigan to Joseph and Helen Ramas (Karosa). She was baptized and confirmed at St. Suzanne Parish. Her father died in the early 1970’s and Helen died in early 1990’s. Pat was devoted to her mother in her later years making sure that she had a house near the lake where she could garden and fish, two of her favorite hobbies. Pat was an only child but grew up in company of many cousins. She graduated from Cooley High School in Detroit and later attended Community College. Patricia worked at Oldsmobile at 18 years old as a secretary. She met her future husband John and was married 6 months later. Their son Tom was born nine months after their wedding day. Patricia was a devoted homemaker, mother and wife who selflessly cared for her sons, husband and extended family and friends. She was a full-time stay at home mom after younger son John Gregory was born in 1966. Her first home was in Redford Township in parish of St. John Bosco’s Church. She worked tirelessly in those years as her husband worked 2 jobs and attended school at night. Her one break would be an occasional Saturday a month when she would drop off her sons at the Livonia mall movie theater for a triple feature and pick them up several hours later. She also made sure that the family went on camping trips. They purchased a camper and traveled to Sommerset Campground near Jackson for many years. There was an amazing trip out west for 3 weeks and the grandmas joined the trip. Pat worked at home until her sons went off to high school and college. She worked as Head Bank Teller at Comerica Bank for 10 years. She received a pension upon her retirement. In early 1970’s Pat and John bought a house in Farmington Hills. It was on a court with 18 houses and 52 kids. She grew very close with her neighbors. The boys attended Our Lady of Sorrows ’s Elementary School and Catholic Central High School. Pat enjoyed hosting many holidays at their home. She set a beautiful table with Waterford crystal and wedding china. She was so thoughtful sending out Christmas cards, each one containing a heartfelt expression of love and good wishes. Her favorite drink and snacks were Diet Vernors and Lays potato chips. She would take time for herself and bowled in a women’s league and golfed in the Comerica golf league. She loved to play Scrabble and do crossword puzzles. She enjoyed going to Florida with her husband each year and trips to the Caribbean, Puerto Rico and Mexico. One of the most memorable trips was the trip to Egypt where she rode a camel and saw the Pyramids. John and Pat retired and bought lake property on Waumegah Lake in Clarkston. Their son (John) built a custom house with spectacular view of the lake. She was busier than ever volunteering at St. Daniels or Columbere Center, daily mass and as a Lighthouse volunteer. She was the proud grandmother of three grandchildren and enjoyed many adventures with them at the lake. She was beloved Aunt Pat to many nieces and nephews. Pat’s most enduring legacy is her children and grandchildren. Her special gift was her humble acts of kindness and service that touched the lives of so many people. She is survived by her son Thomas J. Mickus (Mary) and three grandchildren, Zachary Mickus (Mackenzie), Christopher Mickus and Amanda Mickus. A resurrection memorial mass celebrating her life will be held at Christ our Light Catholic Church, 3077 Glouchester, Troy, MI 48084 on Friday, April 29, 2022 at 10:00 am, 248-649-5510. Church luncheon to follow immediately back in the church social hall roughly between 10:45 am - 1:30 pm. Interment of her remains will be at Great Lakes National Cemetery in Holly, Michigan. A very brief service will be held this day at 3:00 pm. In lieu of sending flowers to the church, donations may be made payable to: “Waterford Senior Center” for the Encore Program, Attn: Erin Asdell ([email protected]), 248-682-9450. The address is 3621 Pontiac Lake Rd., Waterford, MI 48328. Pat attended a very well-constructed program part time in social activities and group entertainment during her decline with Alzheimer’s disease. Erin Asdell is an amazing person who helped Tom in his mother’s decline.

Her Legacy Patricia Joan Mickus (Ramas) - (October 15, 1938 - January 26, 2022), a recent resident of Clarkston, passed away in her sleep from Alzheimer&#8217;s disease. Patricia was happily married for 48 years to the love of her life, John... View Obituary & Service Information

The family of Patricia Joan Mickus created this Life Tributes page to make it easy to share your memories.