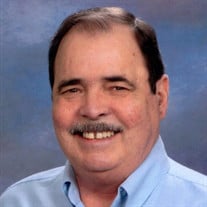 Paul Edmond Henson was born October 11, 1943 in a small holler in ByPro Kentucky at home surrounded by his mother Marie's sisters. His father Milford moved the family to Detroit after leaving the coal mines and gaining employment in the auto factories. Paul grew up in Detroit, and at age 18 was enlisted into the Army in the 173rd airborne brigade where he served in Vietnam from 1965 to 1967. It was there that he received the bronze star for acts of valor and the purple heart for injury in battle while trying to save his lieutenant. After his tour of duty ended he gained employment with Grand Trunk Railroad/ CNN North America Railroad where he worked 38 years as a conductor before retiring. When able he enjoyed golfing with family and friends, and was pretty good. He and son Paul Jr. loved to hunt deer in the lower peninsula, and he hunted the UP with friends from work. He also enjoyed fishing whether on a lake in Michigan or on a houseboat in Cumberland, Kentucky or out to sea in Alaska for Halibut. Paul was an honest, kind, and giving man who loved the lord and had a soft heart. He was a handsome man with a great smile who loved his family and was a great provider. His wife Sally and he had been together for 40 years and married for 35. He often said she was the reason he was still alive, because she was always by his side caring for him and loving him. They have lived in Hazel Park, Michigan since 1980 where his children also attended school. His grandchildren held a special place in his heart, and he was always happy to see and spend time with them. Paul will be missed by so many people he knew in life and especially his family. Paul is survived by his wife Sally Henson, Son Paul Henson Jr and Nancy Henson (Collett), Daughter Courtney Wagner (Henson) and Matthew Wagner. Brothers Jimmy Ray, Jack, and Rex Henson, and Sister Jewel Frisani. He had 4 Grandchildren Elizabeth, Hunter, Kai and Lotus as well as 2 great grandchildren Faith and Luke. A visitation for Paul will take place on Saturday, October 9, from 2:00 to 8:00 pm at Wm. Sullivan and Son, 705 W. Eleven Mile Rd. (4 blks E. of Woodward), Royal Oak, 48067. Paul will lie in state on Sunday, October 10, from 12:00 pm until time of service at 1:30 pm at the funeral home. Paul's wish was instead of sending flowers to make a random act of kindness and think of him.

Paul Edmond Henson was born October 11, 1943 in a small holler in ByPro Kentucky at home surrounded by his mother Marie's sisters. His father Milford moved the family to Detroit after leaving the coal mines and gaining employment in the... View Obituary & Service Information

The family of Paul E. Henson created this Life Tributes page to make it easy to share your memories.

Send flowers to the Henson family.