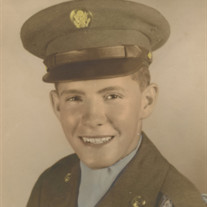 Phillip Sheridan Cooper August 8, 1939 - May 1, 2021 The son of Dora Bell Underwood Cooper and Wilbur Thaddeus Cooper, was born at home on Oil Ridge, Sistersville, Tyler County, West Virginia. The family attended Buck Run Church of Christ. After losing his father at an early age, Phil became the man of the house. He tended the family farm until joining the U.S. Army, in which he served for nine years. He never knew a stranger, often helping people in need with food, shelter, and clothing. He thought nothing of driving miles out of his way to take someone where they needed to be. He treated animals with the same affection. He always kept pets, and his puppy, Oscar, sure does miss him. He once rescued an injured Bald Eagle, caring for it overnight until he could get it to a rescue center. He had a lifelong devotion to hunting and fishing, scarcely ever missing a season, and was an accomplished marksman with bows and firearms of every description. He was even a pro at getting up on water skis. He was an artist early in life. The teachers in his elementary school would ask him to draw holiday scenes on their blackboards with colored chalk. This artistry carried over to his career, as a floor covering installer, for more than fifty years. His multitude of friends across the country affectionately knew him by many different nicknames: Hill-Billy, Cat in the Hat, and Deadeye are just a few. He will be deeply missed by all who knew him. Preceded in death by his parents, Wilbur and Dora; his stepfather, Ralph Mikes; his siblings, Ralph David Mikes and Thyresa Lyn Mikes. He is survived by: Siblings Sharon Ziccardi, Louisville, OH Norma McCourt, Louisville, OH Joe Cooper (Diane), Lewisville, OH Ramona Mowder (Allen), Paden City, WV Jeff Mikes, Anchorage, AK Jim Mikes, Paden City, WV Children Tina Cooper Phillip Lonnie Cooper Shawn Phillip Cooper (Ashley) Crystal Carissimi As well as six grandchildren, and twelve great grandchildren. There will be a small memorial on May 22, 2021 from 2pm-5pm at; Waterford Eagles 1067 S. Cass Lake Road Waterford MI, 48328 There will also be a small celebration of Phil's life in West Virginia but the date is still TBD.

The family of Phillip S. Cooper created this Life Tributes page to make it easy to share your memories.

Send flowers to the Cooper family.