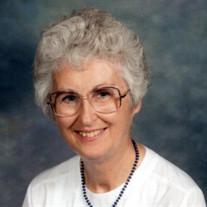 Phyllis Ann Fales of Bloomfield Hills, Michigan died at Cedarbrook Nursing Center on October 6, 2020 at the age of 90. Phyllis was born September 25, 1930 in Troy, New York to Paul Scott Young and Eleanor Tompkins (Wood) Young. Phyllis grew up in Troy and Schenectady, New York. Phyllis earned her R.N. from Massachusetts General Hospital. While attending nursing school, Phyllis met Walter Fales and fell in love. They married on September 8, 1951 in Schenectady, New York. They moved to Michigan, making their home in Royal Oak and raising three sons, Raymond, David and Peter. In 1973, Phyllis earned her Bachelor of Arts degree from Oakland University and her Master of Social Work from Wayne State University in 1980. She worked for many years for Macomb County Community Mental Health Services. Phyllis continued to be interested in women's health issues and was a participant in the Nurses' Health Study conducted by Harvard Medical School and Brigham and Women's Hospital for over twenty-five years. Phyllis and Walter have three sons, Raymond Paul (Charla), David Alan (Shelly) and Peter Kimball (Mary). After retirement, Phyllis moved to Au Gres, Michigan with her husband, joining and becoming dedicated to the mission of the Tawas Area Presbyterian Church. Phyllis served as a Trustee at Tawas Area Presbyterian Church for many years. In 2000, Phyllis was honored as "Volunteer of the Year" by the St. Joseph Hospice-Tawas City. Phyllis spent her first years of retirement traveling the world with her husband as part of the travel group Nomads and visiting relatives and friends throughout the country. After Walter's death in 2009, Phyllis moved back to Royal Oak and then Bloomfield Hills, Michigan. She attended the First Presbyterian Church of Royal Oak. Surviving are her sons, Raymond (Charla) of Houston, Texas; David (Shelly) of Standish, Michigan; and Peter (Mary) of Monroe, Michigan; six grandchildren, Debra (Buddy), Christie (Michael), Carrie (Thomas), Wesley (Jolene), Rachael and Paul and one great grandchild, Reed. A Memorial Service will be held at First Presbyterian Church of Royal Oak at a later date. Memorial contributions may be made to the Tawas Area Presbyterian Church Memorial Garden or a memorial of the donor's choice.

The family of Phyllis Ann Fales created this Life Tributes page to make it easy to share your memories.

Send flowers to the Fales family.