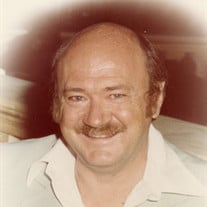 Raymond Eugene Howe, born November 28, 1932 to Raymond A. Howenstein and Thelma L. (Kirkpatrick) Howenstein, passed away peacefully in his Shelby Township, MI home on June 23, 2021. "Ray" was born in Detroit, and attended St. Francis Xavier High School in Ecorse, MI. Following high school, he enlisted in the U.S. Navy Reserves. He moved to active duty with the Navy in 1952-53, serving on the U.S.S. Hornet. In 1954, Ray enrolled at Michigan State University, graduating in 1958 with a B.A. in English. At MSU, Ray met the love of his life, Noralee Ann "Lee" Cobb. Ray and Lee wed in 1959 and were married for over 61 years, until Lee's passing in 2020. Combining his English degree with his electronics background in the Navy, Ray began working as a technical writer shortly after marriage, starting in the defense industry and branching out to other industries over the next two decades. In 1980, he started the sole proprietorship RH Positive, which he continued to run until his retirement. Ray is survived by his sons Christopher (Kimberlee), Gregory (Sheila), Stephen (Mary) and Daniel, and by five grandchildren (Matthew, Jessica, Devyn, Samuel and Shea). He was predeceased by two sisters, Thelma Regina Dennis and Elizabeth Janet Betz. A funeral mass will be held at 10 AM on Wednesday, July 7 at St. Kieran Catholic Church in Shelby Township, with visitation at 9:30 AM. Ray will be interred at Great Lakes National Cemetery in Holly, MI.

The family of Raymond E. Howe created this Life Tributes page to make it easy to share your memories.

Send flowers to the Howe family.