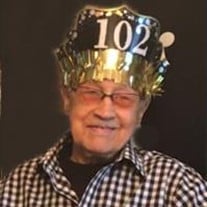 Reginald "Reggie" Telly, of Sterling Heights, passed away on February 9, 2022 at the age of 102. Reggie proudly served his country in the United States Army during World War II. Reggie is the cherished father of Donna (Bill) Fetterhoff, Gary... View Obituary & Service Information

The family of Reginald Telly created this Life Tributes page to make it easy to share your memories.

Reginald &quot;Reggie&quot; Telly, of Sterling Heights, passed away on...

Send flowers to the Telly family.