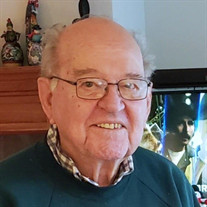 Richard "Dick" Gillette, age 94, passed away on May 3, 2022. He was born on September 25, 1927 in Antwerp, Ohio to Elmer Gillette and Gladys Coil Gillette. As a young boy Dick moved with his mother and two brothers to Detroit. Other than a stint in the Navy, and a few months in Arizona in his late teens, he lived his life in the Detroit area. In his late teens he met Shirley Reed of Cincinnati, cousin of his best friend. Their relationship blossomed and they married in 1952. Their marriage spanned over 64 years of deep love and devotion to each other, and produced four children. Shirley passed away in December 2016. In 1945, right out of high school, Dick enlisted in the Navy. He was in boot camp at Great Lakes Naval Training Center when World War II ended. From boot camp he was assigned to a dry dock vessel in the Philippines. He served nine months before he was honorably discharged. He had many memorable experiences and liked to talk about his time in the Navy. One of his favorite movies was “Mr. Roberts”, and he liked to say he was in “Mr. Roberts Navy”. He also would say about his time in the Navy, “If I had had any more fun I would have had to pay them.” In 1944, as a teenager, Dick went to work for Detroit’s DSR (bus service), starting out pumping gas into buses. After the Navy he went back to DSR and was a mechanic at the Shoemaker Heavy Repair Shop. As with the Navy, he enjoyed his time with DSR and had many experiences he liked to share. In 1957 he left DSR and went to work for Chevrolet at the Engineering Center in Warren. He started there as a mechanic in the test car garage, and soon was promoted to technician with the transmission development group. He retired in 1990 with more than 32 years of service there. Once again, he liked his job and liked to talk about it. In retirement he sometimes would pass on something he’d heard: “If you want to make an old man’s day, talk to him about his job.” Dick was a skilled mechanic and could make most repairs on his vehicles, and on his kids’ too once they began driving. He had quiet pride in his skills and ability, and his roots. On one occasion he related that after making adjustments to a transmission undergoing testing, one of the automotive engineers he was working with said, “I think we should hire more bus mechanics.” Dick will be remembered for his pragmatic approach to life, positive attitude, and dry wit. He was a devoted husband, and a loving and supportive father. He will be greatly missed but will live on in the memories of immediate and extended family and friends. Beloved husband of the late Shirley. Dear father of John (Judy) Gillette, Mary Ellen (Mark) Hildebrand, Jeffrey (Patricia) Gillette, and Jay (Tracy) Gillette. Proud grandfather of Anthony Swanson, Christopher Swanson, Reid Gillette, Beth (Tony) Grim, Jenny (Dave) Kroner, and Jason (Ashley) Hildebrand. Great grandfather of Walter Spin, Alex & Megan Grim, Arlo & Lucy Kroner, and Maddie & Collin Hildebrand. Brother of the late Robert "Bob" (Virginia) Gillette and Kenneth "Lowell" (Virginia) Gillette. Visitation Thursday, May 12, from 10:30 am – 12:30 pm at Wm. Sullivan & Son Funeral Home, 705 W. 11 Mile Rd. (4 blocks E. of Woodward), Royal Oak. Interment Woodlawn Cemetery, Detroit. Share your memories at www.SullivanFuneralDirectors.com. In lieu of flowers, memorial donations to Alzheimer’s Association would be appreciated.

Richard "Dick" Gillette, age 94, passed away on May 3, 2022. He was born on September 25, 1927 in Antwerp, Ohio to Elmer Gillette and Gladys Coil Gillette. As a young boy Dick moved with his mother and two brothers to Detroit. Other than a... View Obituary & Service Information

The family of Richard "Dick" Gillette created this Life Tributes page to make it easy to share your memories.

Send flowers to the Gillette family.