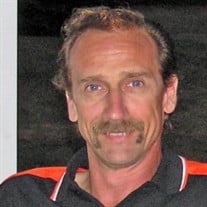 Robert Dale Final Jr. (“Bobby”), age 68, of Romeo, passed away on January 4, 2022. Loving father of Shannon (Steffan) Koch. Devoted partner of Judy Bunch. Proud grandfather of Jack, Gavin, and Vivian. Dear son of Naomi Dennis and brother of Deborah (the late Al) Ellis, David Final, and Kurt Final. Step-son of Joyce Final and step-brother of Janelle and Cindy. Also survived by several nieces, nephews, and cousins. Predeceased by his father, Robert Dale Final. Bobby worked as a machinist with Five Star Automation Systems and before that at the Detroit News for many years—up until the strike. Outside of work, he served his community in various ways. He was an active member of the Detroit Shriners and past President of the Great Lakes Shrine Motor Corp, and a member of the Moslem Shrine Motor Corps, for which he served as Secretary and Treasurer. He also belonged to the Masonic Lodge Centerline #550. In his free time, Bobby enjoyed hunting and shooting, spending time in the woods, and visiting the family cabin Up North. Above all else, he loved being around people. He spent many hours readying the Shriners vehicles that would transport children to medical treatment. And he was a member of the Shrine Motor Corps drill team that competed against other Temples. His passion was riding his motorcycle, doing parades, and competing on the drill team. And he especially enjoyed spending time with his grandchildren—whether it was running them to karate practice or just being silly with them. Bobby always had great stories and was blessed with a wonderful sense of humor that he was quick to share with others. He was deeply loved and will be dearly missed. Visitation will take place on Thursday, January 13, from 2 p.m. until time of services, 6:30 p.m., at Wm. Sullivan & Son Funeral Home, 8459 Hall Rd., (3 blocks east of Van Dyke), Utica. Memorial contributions can be directed to Detroit Shriners Child Care. Share a memory at www.SullivanFuneralDirectors.com.

The family of Robert Dale Final Jr. created this Life Tributes page to make it easy to share your memories.