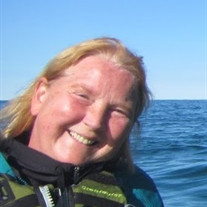 Ruth Glass (age 63), passed on November 12th, 2021. Ruth was preceded in death by her parents, Chester and Henrietta, her sister, Jo, and Brothers, Chester, Paul, and John. She survived by her sister, Diane Morton of Richmond, MI, and Pat (Tony) Grzyb of Algonac, MI., many nieces, nephews, grand-nieces, grand-nephews, and her beloved kitty companion, Fay. Born and raised in Detroit, she also spent her childhood on Van Etten lake in Oscoda, which she considered her second home. Ruth graduated from Denby High School and taught Sunday school at Bethany Lutheran Church in Detroit. She then went on to graduate from Lawrence Tech University, Magna cum Laude, and was a member of the Lambda Iota Tau Honor Society. Ruth's true passion was nature. On top of working full-time at her successful career, she was always involved with organizations that centered around the outdoors and wildlife. Over the years she worked with the Clinton River Watershed Council, as well as held field roles for Michigan DNR, USFWS, Macomb Audubon Society, Shelby Twp. Nature Center, Lake Saint Clair Metropark, Wildlife Habitat Council/Ford Motor Co. Romeo, Seven Ponds Nature Center, and Stony Creek Metropark; where she established and led monthly bird walks and monitored the resident bald eagle nest. Ruth had many great achievements throughout her life, but perhaps one of her greatest accomplishments was her ability to share her love of the outdoors and birds. Her excitement for our feathered friends was wondrously contagious, and she drew so many into her beautiful world of birding. A cherished friend of nature, Ruth will be deeply missed by all the friends she encountered along the birding trails she so eagerly explored. "Of all the paths you take in life, make sure a few of them are dirt." -John Muir In lieu of flowers, the family suggests a donation to The Nature Conservancy, Cornell Lab of Ornithology, or a nature center/Metropark of your choice.

Ruth Glass (age 63), passed on November 12th, 2021. Ruth was preceded in death by her parents, Chester and Henrietta, her sister, Jo, and Brothers, Chester, Paul, and John. She survived by her sister, Diane Morton of Richmond, MI, and Pat (Tony)... View Obituary & Service Information

The family of Ruth A. Glass created this Life Tributes page to make it easy to share your memories.

Send flowers to the Glass family.