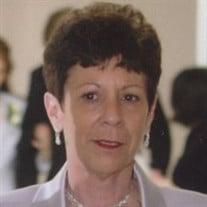 Sharon Betty Ingoglia passed away on February 5, 2022, at the age of 77. A daughter of Thomas Jr. and Betty Knapp, she was born on September 6, 1944, in Detroit, Michigan. Sharon started her career as a nurse and later, with a business partner, started her own company, Nursing Unlimited. She was proud to retire early, at the age of 52. After her retirement from Nursing Unlimited, she joined her son Todd's company (Celebrations Party Rental) and worked there for over 20 years. Sharon is lovingly remembered as a strong and independent woman. She raised her two sons as a single mom with high career ambitions at a time that it was not so common. Sharon was always a competitor, whether in business or athletics. She was a downhill ski racer and racquetball competitor in her younger years. Later in life, she was hooked on golf and enjoyed exploring new golf courses with her golfing friends. Sharon was talented musically as well. She played the flute and competed in piano recitals throughout her youth. Sharon enjoyed spending time with family and friends and was devoted to her children and grandchildren. She will be dearly missed. Loving mother of Scott (Dawn) and Todd. Adoring grandmother of Faith, Scotty, and Julia. Dear sister of Thomas (Barbara) Knapp. A visitation for Sharon will take place on Friday, February 18, from 5:30 until 8:00 p.m. at Wm. Sullivan and Son Funeral Directors, 8459 Hall Rd., Utica 48317. Sharon will lie in state on Saturday, February 19, from 10:00 a.m. until the time of funeral service at 12:00 p.m. at the funeral home. She will be laid to rest at White Chapel Cemetery in Troy. In lieu of flowers, donations may be made to the Dementia Society of America, PO Box 600, Doylestown, PA 18901.

Sharon Betty Ingoglia passed away on February 5, 2022, at the age of 77. A daughter of Thomas Jr. and Betty Knapp, she was born on September 6, 1944, in Detroit, Michigan. Sharon started her career as a nurse and later, with a business partner,... View Obituary & Service Information

The family of Sharon Betty Ingoglia created this Life Tributes page to make it easy to share your memories.

Send flowers to the Ingoglia family.