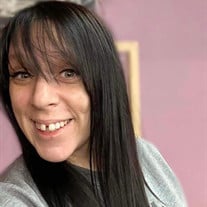 Sheila Rosanne Kroll, born August 19, 1985 in Lapeer, Michigan, passed away January 27, 2022. Sheila was a loving sister and daughter. She graduated from Romeo High School in 2004. Throughout the years she held many jobs where she did far more than what was required to make her guests happy and comfortable. She was an exceptional clerk for the Super 8 Motel in Imlay City, MI. Through various restaurants in the Upper Peninsula, she developed bonds with customers who continued to visit just to see her. She sat with people she loved and people she disagreed with because she was open to everyone. She was generous to a fault. Sheila was a good pet mother. She was preceded in death by Shadow, an Australian-Shepherd/Beagle mix; Casey, a dachshund; and Snoopy, a beagle/pitbull mix. She is survived by Mr. Jay, the son of Casey and Snoopy, who she affectionately called her grandson, and Sherman, a dog whom she took and shared more pictures of than tourists to the Grand Canyon. On the human side, Sheila is survived by her parents, Thomas Kroll and Karen Munzel; brothers Charles (Diane) and Robert; niece Ashley; nephew Timothy; cousins Walter (Jen) and Michael Kroll, Lawrence Noe, Lorell (Joseph) Bosek, John Robertson and Carolyn Robertson; Aunts Suzanne Noe (Lawrence) and Frances (Roger) Robertson. In lieu of gifts, the family requests that you make a donation to Mission Teens, Inc. the group responsible for Mission Bible Training Center in Gaastra, MI, where she spent many great years getting better. A memorial gathering will be held at Wm. Sullivan & Son Funeral Home, 8459 Hall Road (3 blocks East of Van Dyke) Utica, MI 48317 on Saturday, February 12, 2022 from 1pm-4pm, with a sharing of memories at 3:30pm and a memorial service to follow at 4pm.

Sheila Rosanne Kroll, born August 19, 1985 in Lapeer, Michigan, passed away January 27, 2022. Sheila was a loving sister and daughter. She graduated from Romeo High School in 2004. Throughout the years she held many jobs where she did far... View Obituary & Service Information

The family of Sheila Kroll created this Life Tributes page to make it easy to share your memories.

Send flowers to the Kroll family.