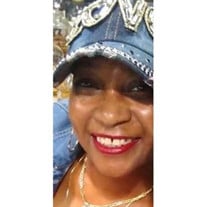 Reflections Terry Elizabeth was born June 11, 1956 in Detroit, Michigan to Nathaniel Gibbs and Maggie B. Gibbs. Terry was the second child of seven and eldest daughter. She was educated in the Detroit Public School System, graduating from Northwestern H.S. in 1974. Terry married Mennen Wade Hollonquest in 1982 and to this union Mennen Wade and Meredith Elizabeth were born. Mennen tragically passed away in 1987. Terry had two full careers, first in retail, where she worked at Hudson's Department store selling women's shoes, for more than 15 years. She loved her job and was featured in a Detroit Newspaper as a "retail superstar." Her second career in education began after meeting Darren Atkins and marrying him in 1994. To this union Darrian Elise was born. Terry would spend so much time at Woodward Elementary school with Darrian, that the principal asked her to come work for her. She worked at Woodward as a paraprofessional until it's closure and moved on to other schools within DPS until she retired in 2018. Terry loved working with children, even though she was stern in her approach, some may have even called her mean sometimes. One thing was for sure, you were not going to disrespect her and for that everyone loved and respected her. She also worked hard on her own education, finally earning her degree from Wayne County Community College and also attended Wayne State University. Terry found Christ at a young age as a member of the Spiritual Israel Church and its Army, Temple #8. She was dedicated to the church, serving in the choir as well as running the kitchen staff. Every Sunday, she made sure she was at church and helping out however she could. Terry was a proud mother, who loved her children and grandchildren. Now she wasn't the "Suzy Homemaker" type, because she would tell anyone who would listen, "I ain't changing no diapers!" However, she was the most giving person you could ever meet; always doing for others, even when she didn't have much of her own to give. Terry was so full of life and beloved by her family. She was that cool Aunty and Cousin that everybody loved. She was also the one you could go to if you needed to know someone's birthday, because she remembered EVERYBODY'S! She was the life of the party, always the first to the dance floor, starting the hustle. Also, if you wanted to hear the truth, Terry was the one to give it to you, sometimes even when you didn't ask. Don't tell her a secret either, because it was no longer a secret because she couldn't hold water. On June 26, 2021, Terry Elizabeth transitioned to her final resting place, the family believes of a broken heart after the death of her mom Maggie B., one week prior. She lived life to the fullest and will be missed by all who knew her. In addition to her mom, she was preceded in death by her father Nathaniel, her brother D'Wayne (Gail), her brother Arnold, her brother Timothy, her grandson Mennen Jr. and her favorite Aunt Margaret. To cherish her memory Terry leaves her sister Alya, brother Michael (Valencia), brother Nathaniel Bernard (Gayle) her children, Mennen (his partner Joyelle), Meredith (Donovan) and Darrian, her grandchildren Trey, Ayana, DaMaiya, Tracen, Amir and Malik and a host of nieces, nephews, cousins and other family members and friends.

Reflections Terry Elizabeth was born June 11, 1956 in Detroit, Michigan to Nathaniel Gibbs and Maggie B. Gibbs. Terry was the second child of seven and eldest daughter. She was educated in the Detroit Public School System, graduating from Northwestern... View Obituary & Service Information

The family of Terry Elizabeth Hollonquest created this Life Tributes page to make it easy to share your memories.

Send flowers to the Hollonquest family.