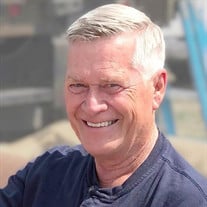 Thomas "Tom" Allen Christopher passed away with peace at the age of 75 on the evening of October 1, 2021, surrounded by the love of his family. Fitting to him, he had his humor until the end and there was laughter between tears. Tom was an engaging, thoughtful, and caring husband, father, grandfather, brother, and friend. He is survived by his wife of 54 years, Colleen; his daughters, Holly (Gary), Tara, and Kirsten (Dan); his grandchildren, Justin, Grace, Kyla, Claire, and Jack. Recently, Tom had the good fortune of connecting with his birth family and was warmly welcomed into a large and loving family by his brother, Jim (Sue), sisters, Caroyl and Pat (deceased), and many nieces and nephews. Tom was born in Royal Oak on April 6,1946, and adopted at birth by his parents, William and Elsie Christopher. He attended the University of Michigan, Ann Arbor before transferring to Wayne State University, where he graduated with a degree in English and Humanities. Tom would later go on to work at his family's business in Detroit and in the years following would become the proprietor of his own company. For several years, Tom served on the Board of the Easter Island Foundation. Both friends and family alike will perhaps remember Tom best as someone who proudly shared the achievements of his wife, children and grandchildren. He was also a man with an impressive array of cultural, artistic and mechanical interests. In speaking with Tom, one couldn't help but notice the near contagious excitement with which he discussed matters spanning the latest marvels in mechanical engineering or the worldview-shattering asymmetry of modernist literature to personal theories on the archaeological enigmas of Easter Island. But those keen enough to engage with Tom's seemingly endless mental catalogue of trivia, quotes, and stories were also quick to find a man who had successfully blended his spirited inquiry with a real earnestness, and to remark that these interests were esoteric was only part of the story. His was a genuine conviction that truth, meaning, and purpose aren't so much to be developed over the course of one's life as they are to be discovered throughout it - often waiting in obscurity for those of us bold enough to admit we could, and should, always know more. The void of Tom's absence is huge, but he has filled the hearts of all who loved him with countless, wonderful memories. A private graveside service will be held in his honor. Due to Covid, a memorial for friends and family will take place at a later date. Memorial donations may be made in honor of Tom to St. Jude Children's Research Hospital.

Thomas "Tom" Allen Christopher passed away with peace at the age of 75 on the evening of October 1, 2021, surrounded by the love of his family. Fitting to him, he had his humor until the end and there was laughter between tears. Tom was an... View Obituary & Service Information

The family of Thomas A. Christopher created this Life Tributes page to make it easy to share your memories.

Thomas &quot;Tom&quot; Allen Christopher passed away with peace at the...

Send flowers to the Christopher family.