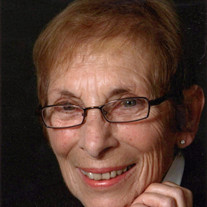 Tillie Ann Nelson of Royal Oak age 87 passed away April 22, 2021 after valiantly coping with several health issues for years. Tillie was born in Murphysboro, Illinois on January 4, 1934 to Lillian (Kaiser) and Charles Travis. Surviving are her... View Obituary & Service Information

The family of Tillie A. Nelson created this Life Tributes page to make it easy to share your memories.

Send flowers to the Nelson family.