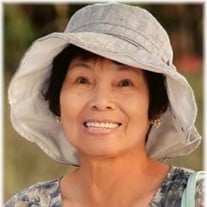 Tomo K. "Toni" Lee, of Clinton Township, passed away on August 15, 2021 at the age of 89. Toni was born on September 17, 1931 in Fukushima, Japan. She married Milton Kellam in 1958 and they had six children. He preceded her in death in 1985. In 1990 she married William Lee, who she met at Arthur Murray Dance Studio, he preceded her in death in 2011. Toni is the cherished mother of Sherry (Michael) Schafer, Judy (Craig) Odren, David (Barbara) Kellam, Patricia (David) Platz, Tammy (Jimmy Taylor) Swanson, and Kimberly (James) Clapper; the adored grandmother of Lauren, Jamie, Kaila, Jared, Derek, Tyler, Cody, Briana, Charise, Devin, Jordan and Aaron; and the loving great-grandmother of Christopher and Maks. In addition to being a wife, mother, grandma and great-grandma, Toni was very active, and she downhill skied into her 70's and golfed into her 80's. She was also a professional dancer in Japan before coming to the United States, and continued to dance until she was 88 years old. She will be greatly missed. A memorial gathering will be held on Sunday, October 10, 2021 from 11:00 a.m. until 3:00 p.m. at the Wm. Sullivan and Son Funeral Home, 8459 Hall Road (3 blocks East of Van Dyke), Utica. There will be an intermission from 3:00 p.m. until 4:00 p.m. to prepare the room for her service. A Buddhist service will begin at 4:00 p.m. at the funeral home. In lieu of flowers, memorials are appreciated to the American Heart Association, 3816 Paysphere Circle, Chicago, IL 60674 or at americanheart.org , or the Beaumont Hospice Fund, PO Box 5802, Troy, MI 48007-9627 or at www.beaumont.org/giving . Please share a memory at www.SullivanFuneralDirectors.com

The family of Tomo Lee created this Life Tributes page to make it easy to share your memories.

Send flowers to the Lee family.