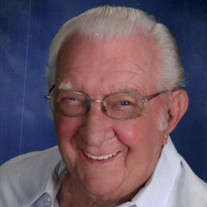 Wallace "Wally" H. Doebler, age 98, resident of Dresden, Tennessee, and formerly of Sterling Heights, Michigan, passed away on June 11, 2021. Born in Sterling Township on June 3, 1923, the son of the late Herbert Doebler and Louise (nee Dickel) Doebler. He was united in marriage with the former Ruth Marie Rowland on June 23, 1945. Wally was baptized, confirmed, and married at Trinity Lutheran Church, Utica, where he was a lifelong member. He attained his elementary school education at Trinity Lutheran and received his high school diploma from Utica High School, which is now Eppler Jr. High School. After graduating from Utica High School, he would later attain his certificates in accounting, industrial foreman, and taxes at the International Correspondence School. Later Wally would also attend Oakland University to further his education. He worked for General Motors -At the truck and Bus Plant for 35 years. In 1966 he invented a set of calipers for taking a special inventory at the plant, which was used in various GM plants. On October 31, 1979, he retired as a General Supervisor with 35 years of service. Wally served as Vice Chairman, Chairman of Education, Finance and Ministerial Housing, Controller, and Treasurer at Trinity Lutheran Church. Chairman and Vice-Chairman of the Trinity Foundation, and volunteer for over 62 years at Trinity Lutheran Church. Prior to his passing, he was the President of the Utica Cemetery Association and a member of the Sterling Heights Community Foundation. Wally was the treasurer for his bowling league for 45 years, director of the Utica Oil and Gas Company, Dotco Inc, member and past president of the 298 Selective Service Board, on December 17, 2001, after 20 years of service he retired from the Selective Service Board. He retired after 23 years of service from the Sterling Heights Historical Commission, having served as President, Vice President, and Secretary, and also retired from the Board of Directors of the Utica Community Schools Foundation of Educational Excellence serving as its treasurer for 11 years. A Rotary member since April 19, 1983, with perfect attendance and serving as President 1986-87, Secretary, and Treasurer. In 1993 he was awarded the prestigious Paul Harris Award. In 2001, 20021, 2004, and 2005, he was voted by his peers the Utica Rotary Club "Rotarian of the Year" award. In 1996, he received the Stevenson S.O.S. (Students Offering Service) service award, 2002 he received the President's "A Step Above" award sponsored by the Sterling Heights Area Chamber of Commerce. In 2007, he was presented with the Macomb County Outstanding Volunteer Award. A member of the Lake Worth Horse Shoe Club since 1970 and inducted into the Hall of Fame of the Lake Worth Horse Shoe Club in March 1996. Member of the Utica Horse Shoe Club from 1970 to 2001, where he was treasurer for 9 years. Also was a member of the Michigan Horse Shoe Pitchers Association. A Member of the GM Truck and Bus Golden Hand Shake Retirement Group, the Sterling Heights Retirees, and Trinity Golden Circle Retirees. Wally and Ruth were world travelers, they reached all 50 states, Europe, Scandinavian countries, Greece, the Greek Isles, Cyprus, and Egypt. He would author and publish three books, In 1989- The Wallace H. Doebler Family of Macomb County, In 1995-"Utica Rotary History, 65th Anniversary, In 1996-"Summer Along the Clinton." Wally enjoyed many hobbies, reading, writing, traveling, gardening for over 50 years, bowling, pitching horseshoes, and golfing. An avid fan of the Detroit Tigers, Lions, Pistons, and the Red Wings with a great amount of enthusiasm. During his early years and especially during high school, he had a speech impediment. He often said he failed all of his oral tests in high school because he was unable to talk. But he sang in the Utica High School Glee Club for three years. He also said if he ever learned to talk, he would never shut up! Wally learned to talk in spite of his school counselors or outside help. He also enjoyed spending elongated weekends at his summer home in Oscoda and visiting with his children and grandchildren. Beloved husband of the late Ruth Doebler (nee Rowland). Loving father of Lynda Doebler, Richard (Karen) Doebler, and the late Herbert. Dear father-in-law of Karen Doebler. Proud grandfather of Collin Doebler, Heidi Doebler, Tyler (Beth) Doebler, Brandon (Kara Beth) Ryan, and Todd (Martina) Schaffer. Dearest great-grandfather of Sarah, Emma, Daxton, Aurora, and Kason. A memorial gathering and service will be held on Saturday, August 14 at Trinity Lutheran Church 45160 Van Dyke Utica, Michigan from 10 am until the time of memorial service 11 am. Inurnment Utica Cemetery Utica, Michigan. Family request donations to UCS Foundation for Educational Excellence, Sterling Heights Community Foundation, or Trinity Lutheran Foundation. Arrangements by the Wm. Sullivan and Son Funeral Home-Utica. Please share a memory at www.sullivanfuneraldirectors.com

The family of Wallace "Wally" H. Doebler created this Life Tributes page to make it easy to share your memories.

Send flowers to the Doebler family.