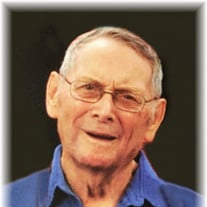 William “Bill” Joseph Edmonds, a long time resident of Royal Oak, passed away on November 21, 2021 at the age of 92. A son of Charles and Blanche (nee Baning), he was born on April 12, 1929 in Flint. William proudly served his country as a Corporal in the U.S. Army as a driver for the Hell On Wheels. William could fix just about anything- an all-around Mr. Fix it - he certainly kept the family’s cars going in tip top shape. He was an accomplished landscape and portrait painter and showcased his talents through several juried art shows. William's humor could only be matched by his independent spirit and boundless energy. His favorite programs were M.A.S.H., Get Smart, The Andy Griffith Show, and Pink Panther. William loved a good Western movie (Rifleman was his favorite). When the children were growing up, they remembered him playing the guitar and singing. An avid Tigers fan, William listened to games in his garage and pickup truck. He enjoyed time outdoors, especially when he could hunt, fish, and play horseshoes. For years, William would spend his weekend at the bowling alley assisting and scoring games for handicapped bowlers. He also enjoyed playing pool and painting at his local senior center, and was a member of the Veterans of Foreign Wars Post in Flint. Beloved husband of the late Ella. Loving father of Suzanne (Alan) Meyer, David, Douglas (Teresa), and Shari (Edward) Alston. Cherished grandfather of Jennifer Hull, William, Angela Meyer, Brandon (Kate), Matthew (Alexandria) Meyer, Daniel Meyer, David, and Shelby Alston. Treasured great-grandfather of Alexander Hull, Riley, Harrison, and Ella Meyer. Dear brother of Elaine Kile, Thelma (Albert) Snider, and the late Harvey and Thomas; and brother-in-law of Betty, and the late Helen, Marlowe Kile, and Janet. William will also be missed by many nieces and nephews. A visitation for William will be held on Friday, November 26, from 2:00 until 8:00 pm at Wm. Sullivan and Son, 705 W. Eleven Mile Rd. (4 blocks E. of Woodward), Royal Oak, 48067. William will lie in state on Saturday, November 27, from 11:30 am until time of funeral service at 1:00 pm at the funeral home. William will be laid to rest at Great Lakes National Cemetery in Holly. Donations in William's name may be made to DAV (Disabled American Veterans) at https://secure.dav.org/site/Donation2;jsessionid=00000000.app30132a?10801.donation=form1&idb=433022702&df_id=10801&mfc_pref=T&NONCE_TOKEN=71CB7C9FCDA4A33D46C2BED773FFF8DB&10801.donation=form?utm_source=advertising&utm_campaign=google&utm_content=evergreen&utm_medium=paidsearch&gclsrc=aw.ds&gclid=EAIaIQobChMI9ffH2vyz9AIVhf_jBx1HAA2IEAAYASAAEgLy7vD_BwE.

The family of William Edmonds created this Life Tributes page to make it easy to share your memories.

Send flowers to the Edmonds family.