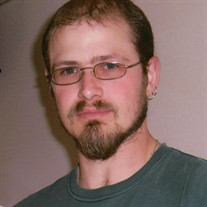 William D. Hanna, a resident of Madison Heights, passed away on Tuesday, October 26, 2021 at the age of 50. A son of the late Clifton Hanna and Christine Riggs, he was born on August 5, 1971 in Detroit. William attended Hazel Park High School before starting his career in floor maintenance. After working for Oakridge Markets for 34 years, he joined Wm. Beaumont Hospital in Royal Oak. William was particularly proud of this career choice because he had to overcome smoking in order to work at the hospital. Dedicated to his profession, he never called in sick. William married the love of his life, Shannon (nee Strong), in October of 1994 at St. Justin's Catholic Church in Hazel Park. In William's hands were always cans of Monster, Diet Mountain Dew, and Guinness. He appreciated fine cigars. William was only quiet until you got to know him, and then you could never get him to quiet down. He could make a joke about anything and anyone, pushing people's buttons until they broke out in laughter. William went on virtual adventures with the Bathory Hordes, an online gaming community for Dungeons and Dragons. He was passionate about console and computer games. William was a sentimental man. He loved his family above all else. One of his favorite things was hanging out late into the night, talking with his family over a few drinks, having a good time and listening to old songs. William's memories were often accompanied by music. Reliable and selfless, William stood up for what he believed in. He will be remembered as a good person who was loved dearly by his family. Beloved husband of Shannon, joined in love for 27 years. Loving father of Amber (Nicholas) Smith, Rachel (Kyle Thompson) Hanna, and William Hanna. "Papa Hanna" to Makayla Budry, Piper Smith, Tessa Smith. Treasured brother of Debra (Shawn) Wellbaum. Dear son-in-law of Kathleen and the late Jerome G. Strong, and grandson of Barbara Montgomgery, the late Wilfred and the late Theresa Riggs (nee Guimond). Best friend of Joesph Corsetti. William will also be missed by his Godchildren and many nieces, nephews, cousins, in-laws, and friends. A memorial visitation for William will be held on Wednesday, November 3, from 4:00 until 8:00 pm with a memorial service at 7:00 pm at Wm. Sullivan and Son, 705 W. Eleven Mile Rd. (4 blks East of Woodward), Royal Oak, 48067.

William D. Hanna, a resident of Madison Heights, passed away on Tuesday, October 26, 2021 at the age of 50. A son of the late Clifton Hanna and Christine Riggs, he was born on August 5, 1971 in Detroit. William attended Hazel Park High School... View Obituary & Service Information

The family of William Donald Hanna created this Life Tributes page to make it easy to share your memories.

William D. Hanna, a resident of Madison Heights, passed away...

Send flowers to the Hanna family.