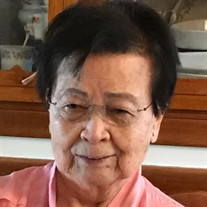 Yoke Kin Yee, 93, of Macomb Twp., Mich., passed peacefully of natural causes at Beaumont Hospital in Troy, Mich., on Dec. 26, 2021, while surrounded by loving family. Her journey began in the village of Kaiping in the Chinese province of Guangdong on Aug. 17, 1928. She was the daughter of Seto Si Yung and Yee Won Han, who were farmers. She met and married her husband, the late Yee Poi Ly, in 1946. They had two daughters, Rose and Catherine. Mother and daughters stayed behind while her husband came to America to prepare the way for the family. That separation lasted almost 10 years because of political turmoil in China. She and the daughters arrived in America in 1959. The reunited family lived in Detroit and saw the birth of two sons, David and Edward. She settled into a life of hard work, kindness, and generosity. She brought over and sponsored many of her relatives. Her life was devoted to family. Her husband died in 1975, and she focused tirelessly on her daughers' new families and her sons' education. Her children and large extended family all felt the strength of her love and caring. The family members she sponsored started new lives and careers all over the world, and they in turn had children who went on to lead lives of accomplishment. Her everlasting legacy is her large and thriving family whose lives were enriched by her wisdom and kindness. From a small village in China, a great and gentle soul created an entire universe of hopes and dreams. She is survived by her brother Seto Tak Cho (Yeu Moon Lim) of Hong Kong; her sister Deng Yoke Jung of Macomb Twp., Mich.; her daughters, Rose (Vichai) Sriprasert of Bangkok, Thailand, and Catherine (Michael) Beaton of Shelby Twp., Mich., and sons David Yee (Jintana) of Boston, Mass., and Edward Yee of Macomb Twp, Mich.; 10 grandchildren, Michael (Heather) Beaton of Atlanta, Ga., Andrew Beaton of Shelby Twp., Mich., Elaina (Sam) Yenglin of Grand Blanc, Mich., Jennifer (Simon) Sriprasert, Lena (Pipat) Sriprasert, Linda (Jirawat) Sriprasert, Lisa Sriprasert and Jeffrey Sriprasert of Bangkok, Thailand, Amanda Yee of Boston, Mass., and Christina Yee of New York; 9 great-grandchildren, Ryan, Colin, Ayla, Ellie, Mattie, Jay, Lynn, Kate, and Kris; and numerous nieces and nephews. A visitation for Yoke will take place on Monday, January 3, from 10:00 am until time of service at 11:00 am at Wm. Sullivan and Son, 8459 Hall Rd. (3 blks E. of Van Dyke), Utica, 48317. Interment to follow at Scotch Settlement Cemetery in Almont, MI.

Yoke Kin Yee, 93, of Macomb Twp., Mich., passed peacefully of natural causes at Beaumont Hospital in Troy, Mich., on Dec. 26, 2021, while surrounded by loving family. Her journey began in the village of Kaiping in the Chinese province of Guangdong... View Obituary & Service Information

The family of Yoke Kin Yee created this Life Tributes page to make it easy to share your memories.

Send flowers to the Yee family.